Can Arvind Kejriwal be a giant slayer in Varanasi?

by: Confidence Uwazuruike April 29, 2014 in TOP STORIES Leave a comment 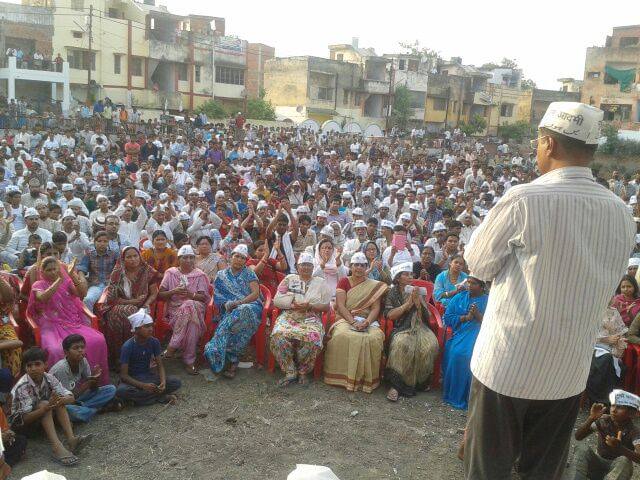 As the 2014 Lok Sabha elections begin to wind up, the BJP and Congress have intensified their mudslinging — even as one man continues to draw people to his cause. Arvind Kejriwal, 45, leader of the Aam Aadmi Party, is looking forward to a successful outing for his party, especially in Varanasi where he will contest against the Bharatiya Janata Party’s Narendra Modi.

His message, which can be summarised as ‘Congress is corrupt and BJP is no better’, has not changed since his campaign began. In Varanasi, he told people to vote for his party or risk a gas price hike. Unlike the Congress, accused by Modi of allegedly favouring Priyanka Gandhi’s husband Robert Vadra, and the BJP, accused of allegedly supporting the business interests of the Adani group of companies, Kejriwal seems to be concerned with what could be called a people’s model. He repeatedly told the crowd in Varanasi, ‘I am a fakir’– a poor man. At some point, he said he had only Rs 500 in his pocket.

This attempt, at various points in his campaign, to connect with the common people and present himself as one of them seems to have widely increased his popularity. He was recently named Time magazine’s most influential man of the year in its annual readers’ poll, pushing Modi to second place. He also dominated the list of the most-watched politicians on YouTube.

However, the contest he would love to win most of all is the Varanasi Lok Sabha seat for which he is pitted against Modi. He has said that his attempt to defeat Modi in Varanasi is not a battle of prestige but an attempt to save the country from the corrupt forces of the BJP and Congress.

Modi has some reason to be worried because Kejriwal’s popularity is not just online. In December 2013, he defeated three-time chief minister of Delhi Sheila Dikshit in her own constituency. And he was only a rookie at the time.

Apart from Varanasi, Modi is also contesting in Vadodara, his home turf in Gujarat, an act some people have referred to as cowardice. Whether or not that’s true, winning in Gujarat and losing to Kejriwal in Varanasi would be an embarrassment to Modi. Will Kejriwal be the pawn that checkmates the king?

This story was also carried in WoNoBo, our media partner.

Share this Story
Previous: ‘Next elections will throw up brilliant candidates. The surge of energy today will crystallise by tomorrow’
Next: ‘The entire approach of Modi is to fight elections against Muslims’