When India voted, did Mumbai really not care?

by: Apekshita Varshney April 25, 2014 in TOP STORIES Leave a comment 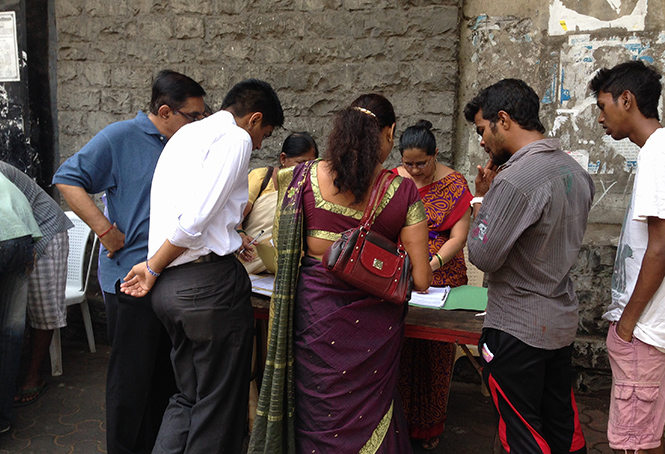 The scorching heat coupled with Mumbai’s humidity did not stop her. Nor did the serpentine queue. Wiping the sweat that trickled down her forehead, Pratima Gupta, 48, was determined to exercise her democratic right to vote. Standing in line at a polling booth in Mumbai on April 24 when the city had its turn at the 2014 Lok Sabha elections, Pratima raised concerns over the worsening weather, aberrant to the island city, and sometimes, even the current government.

As a mother of two, the safety of her daughters, the scope of employment, and a stable economy are only a few of the many issues Pratima wants her elected government to resolve, though she acknowledged that Mumbai still has a gloss that other cities lack. “Elsewhere, opportunities are few and the environment conducive for women to make the most of opportunities is lacking,” she said.

But better than other cities or not, Mumbai’s active voters on April 24 still felt there was room for improvement. For women, safety was the biggest issue since, over the last 10 years, Mumbai has lost its famous ‘always safe’ tag. As 20-year-old Rani said, “I am voting today, so that tomorrow I can walk on the road without fear.” And for young people in general, as 24-year-old Akhilesh Gupta said, work was important. “We hardly have jobs. I want the government to generate more jobs,” he said.

But though 11.98 million Mumbaikars share each other’s apprehensions, in 2014, only 51.98 per cent of the city’s eligible voters thought it was important to be part of the democratic process that will determine who rules for the next five years. Yet, this figure is better than that of the 2009 elections, when despite the fury after terrorists from Pakistan held Mumbai hostage for nearly a week in November 2008, the polling percentage was an abysmal 41.4 per cent.

Mumbai’s lack of involvement in the democratic process can be baffling. Even a watchman at a polling booth on April 24 commented on it. “We expected a horde of people to turn out today, but…” he said helplessly, gesturing towards the sparse crowd. Though some part of Mumbai’s relatively poor voting figure in the 2014 Lok Sabha polls can be attributed to mistakes in the electoral rolls – some 15 per cent of the city’s eligible voter population discovered their names were not on the lists – the city does seem to have a too-busy-to-care, insouciant attitude towards elections.

Rahul Phadnis, 24, didn’t even bother to register as a voter because he finds the entire process bogus. “I don’t think any change is going to come my way by voting,” he said. So political apathy is one reason why some Mumbaikars did not vote. There is also snobbery from people who can afford to buy themselves privileges that others cannot, who therefore can’t see a purpose in stepping out of their air-conditioned abodes to contribute to a larger change.

Mumbai is charming, no doubt. It has a bounce-back spirit that the whole country acknowledges, that lets it take virtually anything in its stride.

But that spirit is lacking on election day. And that is Mumbai’s greatest defeat.

Share this Story
Previous: No lines here. Low turnout or good management?
Next: Mumbai MPs will have a difficult task pleasing its diverse population