In a Mumbai constituency, a Congress candidate counts on the poor 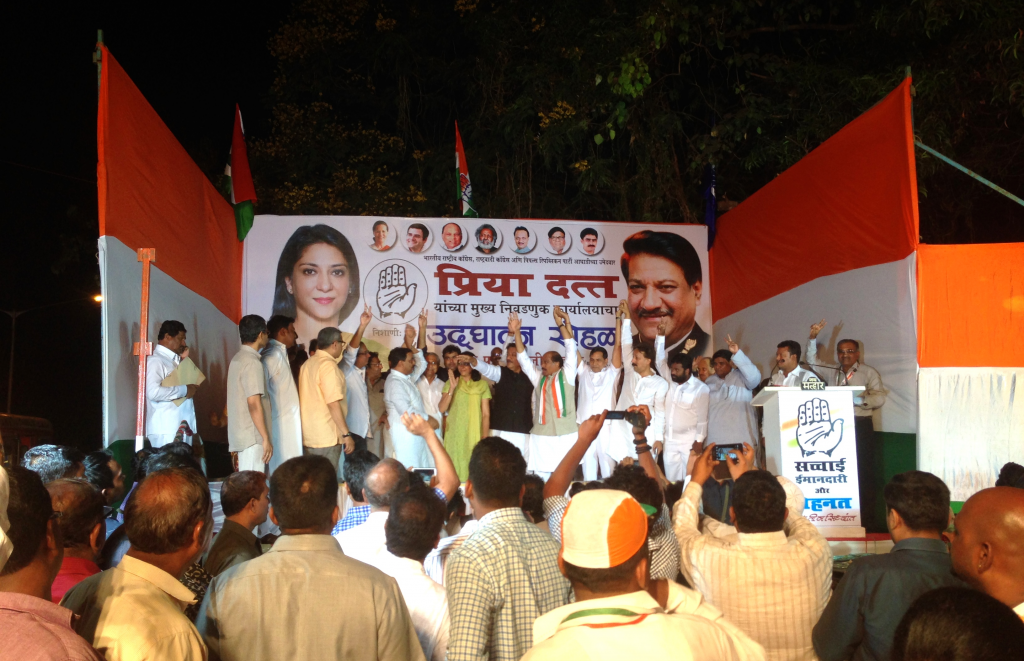 Against the background of an apparent Bharatiya Janata Party resurgence, it was a chance for the party faithful to rally together. And in the Mumbai north central constituency, Congress members seemed confident that incumbent Priya Dutt could defeat challengers from the BJP and also those who might split the anti-BJP vote — the Aam Aadmi Party and the Samajwadi Party.

The inauguration of the Congress election headquarters saw hundreds of supporters cram into a makeshift meeting place by the side of the road in Kalina, a western Mumbai suburb. There was little applause. But people seemed to welcome the speeches from top party figures, including Dutt herself and Maharashtra Chief Minister Prithviraj Chavan.

Before the event, Dutt, the sister of Bollywood actor Sanjay Dutt, said the campaign was “very hectic and very good”. She dismissed worries about the challenge from a resurgent BJP, but also the Samajwadi Party and the AAP.

“The AAP won’t make a huge difference,” she said. “This time people are much more aware of what is happening and who they are voting against. They can see the vote is not divided — they are clear-headedly considering their vote.”

Dutt’s rivals are focusing on what they say is her lack of engagement with her largely slum-residing constituents. They claim she has done little to improve conditions in an area in sore need of improved infrastructure.

“I will be honest, all the other candidates don’t live in the area,” she said. “They had nothing else against me. A lot has been in the media in advertising, a lot of negative campaigning.”

Dutt reeled off a list of her regular engagements: Six months a year at the Lok Sabha in Delhi; work for her charitable trust; attending her monthly medical camps; working in her office for four hours a day when she is in Mumbai; listening to her constituents raise concerns at public meetings.

“I fail to see how they corroborate that,” she said of her opponents’ criticisms.

At the rally, Dutt could be seen rushing on and off stage, directing her followers as masses of people pushed to be near the speakers. Lines of white-clothed party volunteers tried to hold crowds in place, sometimes resulting in altercations as people wandered in from the street.

Under floodlights, it seemed that her supporters were as committed as ever — despite the event starting several hours late and more than one scuffle between members of the packed crowd.

Many of those present focused on what they said was the misleading focus on Narendra Modi’s leadership of Gujarat. Abdul Rahim Khan was among the party faithful, having previously worked as a leader in the Youth Congress. He was upbeat after the rally and ready to offer the party line.

“Congress has done a very good job here,” he said. “Most of the development in India comes from Maharashtra.”

He accused the BJP of misleading the public about the so-called Gujarat model of development. “They have paid money to PR campaigns,” he said. “The same progress was done in Maharashtra with a Congress government.

“Modi is similar to Hitler and Goebbels,” he added. “If you say a lie 100 times, and hope it will be true. They want to make a separate India with something special for the majority and nothing for the minority.”

Businessman Imran Khan was also enthusiastic, and shrugged off claims that the SP and AAP could split the Dutt vote.

“People know she is the strongest candidate in this area,” he said. “The election is going very well for us.”

Hitesh Singh, a young Congress supporter, said the focus on a BJP win was because BJP leader Narendra Modi “is hypnotising the people”. He was optimistic of a Congress win, though.

“Our work is going on properly,” he said, adding he was sure local people would see through opposition claims about his candidate.

As the event drew to a close, Chavan was quickly escorted away by his security entourage, shoving aside the assembled mass of well-wishers, reporters and party volunteers.

Dutt was surrounded by supporters. They all made their way into a small room in the headquarters, decked with maps of the area, to plan for the last stretch of the campaign.

As the chairs were collected and people started to drift off home, an older man, Satrikas, remained. “All the people were here today, this is a very important election,” he said.

Did he feel confident of a Congress victory? He shrugged.

“I don’t know who the next prime minister will be.”

Share this Story
Previous: ‘I think we made a mistake on resignation. We should have consulted people before resigning’
Next: ‘Most congressmen believe they were born to rule. The first family of the Congress firmly believes that’