The big match before the final showdown in Mumbai 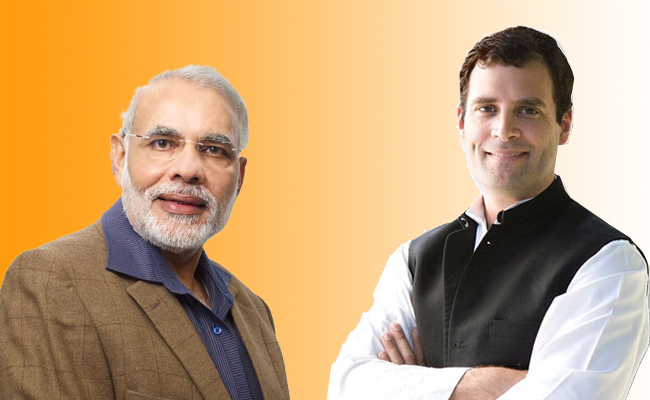 The big match took place over two hot, dusty evenings in Mumbai’s MMRDA ground in suburban Bandra Kurla Complex. It was originally billed as being Sonia Gandhi, representing the incumbent Congress, versus Narendra Modi, the resurgent upstart whose bombastic speeches are taking the country — or at least part of it — by storm. A few substitutions later, it was eventually Sonia’s son Rahul Gandhi who wore the Congress colours, while Modi formed a tag team with ally and Shiv Seva president Uddhav Thackeray.

Tens of thousands of people attended both events — and it was difficult to discern which side won on numbers. Either way, it would have been a good night for taxi and auto-rickshaw drivers, as crowds swarmed in from around the state to support their man.

The crowds at the Congress rally seemed younger and more energetic as they stood on the road waiting to enter the rally. People wore the party colours as they swarmed towards the security gates at the entrance to the main event.

Their concerns were widely shared: Modi was a “fascist” without an economic plan, and relied on big business donations to spread his propaganda. But could the Congress win? “Let us hope so, because Modi’s propaganda machine is strong,” said Deepak, an older Congress supporter from Mumbai. 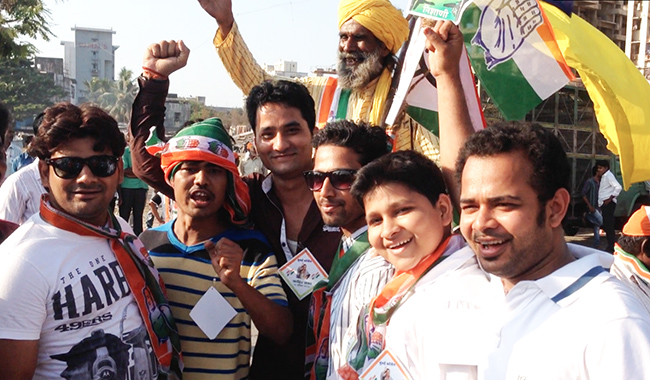 Sonia Gandhi had pulled out of the first rally at the last minute, citing ill health. But this didn’t seem to dampen spirits too much. People liked Rahul’s more combative speech, as he took on Modi’s “divisive” politics and boasted of how many Maharashtra residents the UPA had pulled out of poverty.

As his speech drew to a close, dozens of his supporters crammed their way into the hitherto tightly controlled press area, pushing themselves to the fence to shake his hand.

Modi’s rally the following day did seem busier, but the crowds outside were more organised as they shuffled their way through the metal detectors into the audience area.

There was less chanting, and fewer people had made the effort to decorate themselves with their party colours than the previous day. But it seemed to be more politically plural — among the BJP members were significant numbers wearing Shiv Sena badges and Republican Party of India-Athavale sashes. Orange and white cut-out masks of Modi were worn by many, of various political backgrounds.

Businessman Deepak Desai said Modi was a man with a “vision”, who stuck to his plans “right or wrong”. “Modi put Gujarat on the world map,” he said. “Things happened in the past with the riots. But to go ahead you have to keep going forward.” He added that there were many Muslims in the BJP as well.

There was at least one Muslim at the rally. But ‘Sameer’ (name changed), a young man from Mumbai, said he was a Congress supporter.

“Modi had bad words for Muslims,” he said in a hushed voice. “I have come here to see him and to tell Muslims what he plans to do.”

A few teenagers were happy to speak about Modi. Why did they support him? “We just go with the flow,” said one of them, before an older man, who seemed to be the head of their delegation, pushed in front of him to explain Modi’s appeal — Gujarat, strength, a bright future.

Modi’s speech seemed to get a better reaction from the crowd than his rival’s. There were bouts of applause and standing ovations, and chanting intermittently erupted across the area. 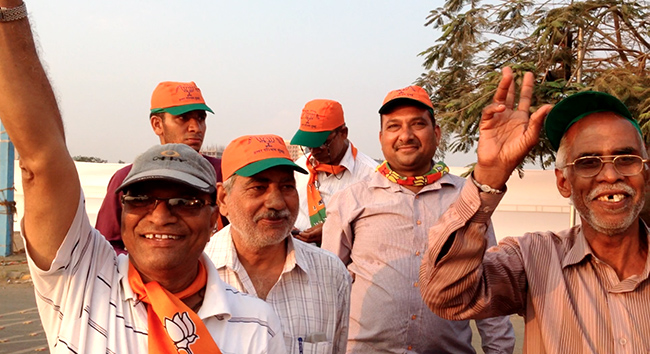 His speech was far longer, too, lasting nearly an hour compared to Rahul’s 35 minutes. He wanted India to match South Korea’s standing in the world, he said, and accused his opponent of “poverty tourism”.

Several hundred of those gathering were eager to leave by this point, and started to make their way back out of the enclosure. Others weren’t so happy about that, and cajoled them, with some even blocking their paths.

As for who won, the crowds seemed relatively evenly matched, and while Rahul was in good form he didn’t seem to be able to compete with the bruising words of Modi. Also, while the Modi crowd may have had a more conservative feel about them, their enthusiasm was more widespread.

As the masses made their ways home — on what could be considered, if nothing else, several good nights for taxi drivers — clouds of dust rose from the arena and spread into the Bandra streets. It will settle soon, in a few hours, when Mumbai goes to the polls.

Images: Patrick Ward (the main image is a Photoshop manipulation of campaign photographs)

This story also appeared on Rediff.com, our media partner

Share this Story
Previous: Crime, wealth, education and gender: our guide to Phase 6
Next: Tamil Nadu candidates come top… in a very different kind of poll