As polling ends, a profile of the men and women who fought for your votes

On the final day of polling in the world’s biggest election, voters in 41 constituencies across Bihar, Uttar Pradesh and West Bengal will cast their votes, and, of course, post photos of inked fingers on social media. The 8,234 candidates who  submitted themselves to the electorate over the past month were obliged to declare their education, assets, and a range of other details. Based on that information, here is a quick profile of the candidates who fought for the 16th Lok Sabha seats.

Female candidates made up just 8% of the field. In the last Lok Sabha women occupied 11% of the seats. This means that in order to beat that figure, female candidates will need to be more electorally successful than their male counterparts this time around.

Most candidates were in their 40s, the average age being 47.

There were 52 candidates aged 25. The constitution states that anyone under the age of 25 may not sit in the Lok Sabha.

At 93 Ram Sundar Das is the oldest candidate — the only one in the 90s, in fact. He is running in Hajipur, Bihar for the Bharatiya Janata Party.

Just under one-third of the candidates are graduates, and over 40% declared that they are educated to a high school level.

Five per cent of candidates have no formal education.

The majority of the candidate, 82%, have never been involved in any criminal cases.

Two candidates from the Aam Aadmi Party in Tamil Nadu came top of the list in terms of involvement in criminal cases.

Udayakumar S P declared in his sworn affidavit that he has been involved in 382 cases, which include 19 charges of attempted murder and 16 charges “related to waging, or attempting to wage war, or abetting waging of war, against the Government of India”.

M Pushparayan, came a close second, declaring he has been involved in 380 criminal case.

Data compiled by the Association for Democratic Reforms and National Election Watch, based on sworn affidavits from candidates.

by: Patrick Ward in TOP STORIES Leave a comment

Will Mumbai come out to vote?

by: Priyanka Bhatt in TOP STORIES Leave a comment 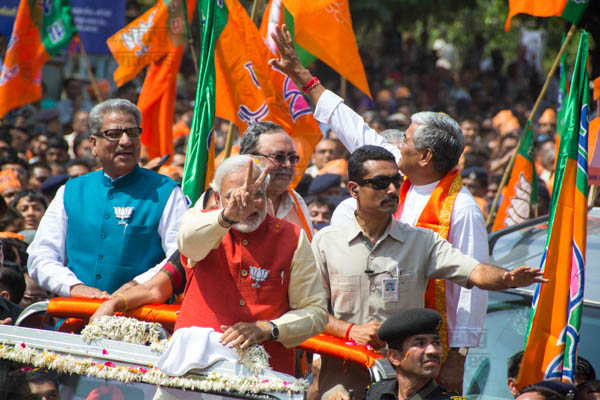