Mumbai MPs will have a difficult task pleasing its diverse population 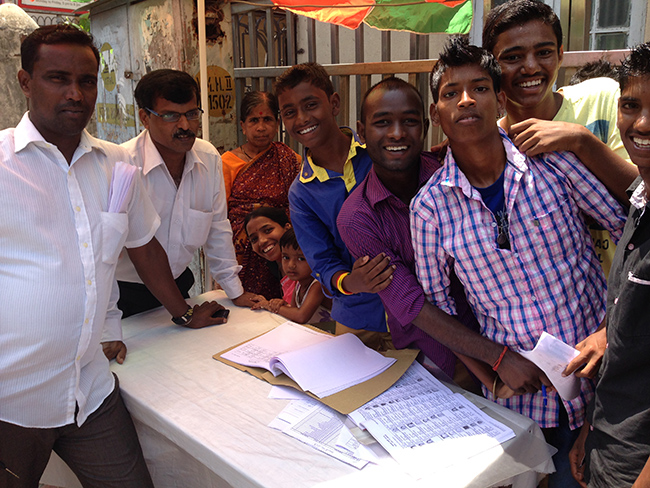 You would have to have been living under a rock wearing cast iron earplugs not to have known there was an election going on in Mumbai. Weeks of rallies, megaphone wielding volunteers and mass leafleting sessions have been part of daily life here in India’s biggest city, and it would be difficult for any of its 13 million inhabitants not to have walked under the smiling faces of the major candidates as they peered down from massive billboards along every main road.

So there wasn’t much else on the minds of Mumbaikars — those who were awake, that is — from 7am on April 24 when the voting stations opened. The streets were strangely quiet — it being a public holiday — with even cabbies nowhere to be seen, and the air rather still, where there was usually the unending cacophony of car horns.

I spent the day in several areas of Mumbai South. The constituency is probably one of the most representative of Mumbai as a whole — from the slums of Byculla to the luxurious gardens of wealthy Malabar Hill. At a polling station on touristy Colaba Causeway, the first voters came in dribs and drabs from just after polls opened. The first were the older generation, who unanimously spoke of their pride and duty in taking part in the poll.

Eric Roche proudly presented his inked finger. He said his priorities in choosing a candidate were development and unity. “Uniting people is very important, or there’s fighting all over,” he said.

Development was also a top priority for Italia Rohinton. He thought a Bharatiya Janata Party victory was likely this time round, in part because people had suffered enough from rising prices. “They are not controlling the prices,” he said. “That’s the first thing the government must do. The first thing.”

Several others made the same point about prices, but some, like T B Delal, said that in order to achieve this a stable government was needed. “There’s no point in voting for regional parties,” he said.

But for Kamal, a young woman who stopped to vote on her way to work, the important issue could be summed up in one word: secularism. “I’m confident of the result,” she said over her shoulder as she briskly continued down the street.

Others were clearly tired of all the ballot options, but the principle of voting was what mattered. Jon was in a hurry, but what was important to him? “Today everything is important,” he said. “But I’ve been voting for so many years, and nothing ever comes of it.”

Colaba is a mixture of the various elements of Mumbai. To see what the richer folk think, I took a trip to Malabar Hill – the wealthiest part of Mumbai, and possibly all of India. Interestingly, the framing of the election issues had suddenly changed — now it seemed to be, who would best represent the local Marathi population?

Mangesh was part of a huddle surrounding an election information desk in the street. For him, it was all about getting Narendra Modi in as the next prime minister. “Corruption is the most important thing for me,” he said, “so it’s most important that Modi wins.”

At that point Sanjay pulled up on his scooter, its front adorned with a Shiv Sena sticker. “I’m not sure who’ll win,” he said. “Marathi votes are divided.” But if Shiv Sena and the BJP get the man in they want, “there will be 100% change”.

When I popped into an expensive Western coffee shop, the young counter staff were keen to hear who I was rooting for. “BJP?” they asked, “or Shiv Sena?” Nearly as an afterthought, one of them added, “Or Congress?”

In the taxi ranks at the top of the hill near an entrance to Kamala Nehru Park,  driver Rushan Taerri said he wanted a “strong man” leading the country — and that man was Rahul Gandhi. “Modi’s just the new guy,” he said. “He’s not confident at making decisions.”

The final part of the jigsaw that is South Mumbai was Byculla — a mixture of Marathis, slum residents and minorities, a far cry from the glistening glass high rises of Malabar Hill. At one voting booth a stone’s throw from the market, the final groups of voters were coming in.

Shailesh and Raika came with their children. “People want change,” said Shailesh, “and they are all coming to vote today for that.” He said that corruption had to be tackled, because it could be seen all over the world.

For his wife Raika, it boiled down to one thing: “Security for women.” “Write good about our election,” she said as she left, kids in tow behind her.

A young police officer closed the gates and started to turn latecomers away. “It’s very important for people to come and vote,” he said, after asking me a few questions about who I was. “Everyone cares about the election, it’s a very proud day.”

He said he had seen thousands of people through the day, and that his polling station had seen a high turnout. “I’ve been working for the past two days, but I’m proud to do that,” he added.

Mumbai saw a 53% turnout on the day, an 11% increase on 2009 but still lagging behind many other parts of India. Mumbai South saw 54%, not a huge improvement. But it seemed that political understanding was quite high among Mumbaikars, at least about what issues were important to them. Perhaps, with fears over disunity under Modi, corruption under Congress, and the unknown territory of the new Aam Aadmi Party, there was some hesitation in making their electoral mark. But it’s clear that whoever wins will have a difficult task to please the diverse mix of residents in Mumbai South.

Share this Story
Previous: When India voted, did Mumbai really not care?
Next: For many Mumbaikars, it is about peace and security